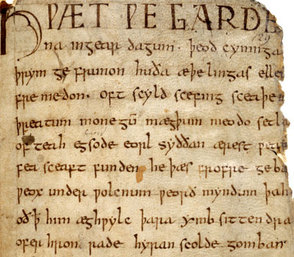 From the first page of the epic poem Beowulf
As the name indicates, Old English/Anglo-Saxon Literature encompasses literature written in Old English by the Anglo-Saxons between the 7th century - 1066. Of the nearly 400 surviving manuscripts, arguably one of the most important works from this era is Beowulf.

Beowulf, literally "bee wolf" or "bee hunter", (a kenning for "bear") is the title of an Old English, heroic, epic poem made up of 3182  lines set in Scandinavia.
The poem survives in a single manuscript known as the Nowell Codex. It was composed by an anonymous poet sometime between the 8th and the early 11th century. Sir Robert Bruce Cotton had assembled a collection of medieval manuscripts, including Beowulf, but a devastating fire swept through the building which housed his collection in 1731, badly damaging the Beowulf manuscript. It then fell into obscurity for many years. Its existence became widely known again when it was printed in 1815 by the Icelandic scholar Grímur Jónsson Thorkelin.

In the poem Beowulf, a hero of the Geats, battles three antagonists: Grendel, who has been attacking Hroðgar’s (the king of the Danes) warriors in the mead hall known as Herot; Grendel's mother, and a dragon. After his first two victories, Beowulf goes home to Geatland in Sweden, becoming a well-loved king of the Geats. The last fight takes place fifty years later. In this final battle, Beowulf is fatally wounded. After his death, his servants bury him in a tumulus in Geatland.

Beowulf is an epic poem in that the epic hero travels great distances to prove his strength at impossible odds against supernatural demons and beasts. The poem also begins in medias res ("in the middle of things"), another characteristic of epics. An elaborate history of characters and their lineages are spoken of, as well as their interactions with each other, debts owed and repaid, and deeds of valor, giving us an intimate glimpse into Anglo-Saxon life.

The poem also deals with legends. It was composed for entertainment so it does not separate between fictional elements and real historic events (such as the raid by King Hygelac into Frisia, ca. 516). Scholars generally agree that many of the personalities of Beowulf also appear in historic Scandinavian sources concerning historical people (e.g., Healfdene, Hroðgar, Hroðulf, Eadgils and Ohthere) and clans (e.g., Scyldings, Scylfings and Wulfings) as well as some of the events (e.g., the Battle on the Ice of Lake Vänern). The majority view is that people such as King Hroðgar and the Scyldings in Beowulf are based on real people in 6th-century Scandinavia.

In Denmark, recent archaeological excavations in Lejre (where Scandinavian tradition located the seat of the Scyldings, the Heorot of the poem), have revealed that a hall was built in the mid-6th century, exactly the time period of Beowulf.  Three halls, each about 50 meters long, were found during the excavation, consistent with the descriptions in the poem. Other 19th-century archeological evidence may confirm elements of the Beowulf story.