The Kite Runner
by
Khaled Hoseinni 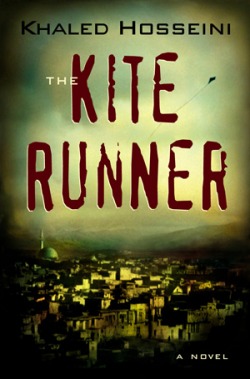 Khaled Hosseini's quietly powerful debut novel The Kite Runner fulfills the promise of fiction, awakening curiosity about the world around us, speaking truth as the lessons of history echo down the years. The themes are universal: familial relationships, particularly father and son; the price of disloyalty; the inhumanity of a rigid class system; and the horrific realities of war.

In Afghanistan, young Amir's earliest memories of life in Kabul are blessed with a cultural heritage that values tradition, blood ties and a deeply rooted cultural identity. As an upper class Pashtun, Amir enjoys the luxury of education, material comfort and a constant playmate, the son of his father's longtime Hazara servant, Hassan.

Twice in his lifetime Amir is morally tested in his relationship with Hassan. The first time, a victim of his own arrogance, Amir fails his companion. Hiding behind the superiority of class, Amir chooses the path of least resistance, but the scar of betrayal cuts through his soul and never heals. That first failure dictates Amir's inner dialogue throughout his life, even in America, until he is offered another chance at personal redemption. Returned to his homeland at the request of an old family friend, the second challenge is equally perilous, and Amir recognizes the very real implications of his decision. This internal struggle is the underlying theme of the novel, which spans Afghanistan's history from the peaceful 70's to the repressive rule of the Taliban in the late '90s.

Played out on the world stage, a desperate battle to preserve the cultural heritage of Afghanistan spans Amir's life in Kabul and America. While Amir and his father reside safely in America, their homeland is decimated by constant warfare -- streets lined with beggars, fatherless children whose future is marginalized by poverty: "There are a lot of children in Afghanistan, but little childhood." The sweet simplicity of youthful winters spent "kite running" with Hassan seem light years away, illuminated by the boys' unfettered innocence.

Against this stark landscape, the adult Amir is challenged as never before, charged with the protection of a young life already scarred by the random violence visited upon the disenfranchised. With inordinate compassion and stunning simplicity, Hosseini portrays Amir's impossible dilemma. Complications abound, but the answer lies in humanity's capacity for kindness. The grace of acceptance heals the wounds of brutality, for with forgiveness anything is possible, even the wild joy of soaring kites against a winter sky.

Originally published on Curled Up With A Good Book at www.curledup.com. © Luan Gaines, 2003
Listen to an interview with Hosseini: